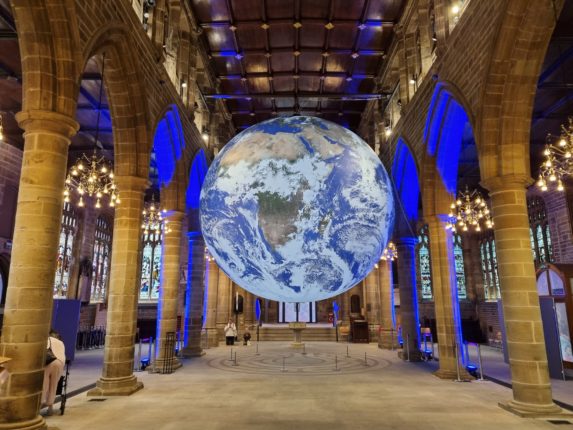 The installation aims to create a sense of the Overview Effect, which was first described by author Frank White in 1987. Common features of the experience for astronauts are a feeling of awe for the planet, a profound understanding of the interconnection of all life, and a renewed sense of responsibility for taking care of the environment.

Ticketing Update: In partnership with Wakefield Council and the Festival of the Earth, the decision has been made to remove ticketing for General Admissions to see Gaia. This is to both remove any barriers to individuals wishing to book tickets but unable to access them online, whilst also giving as many visitors as possible the opportunity to see the exhibition, without the need for rigid timeslots potentially restricting visitor numbers.

Those who have already booked tickets will still be able to redeem these at the exhibition and will be given priority access at the timeslot they have booked for.

The safety of visitors to the cathedral remains of paramount importance so a revised capacity limit will still be in place, if the capacity limit is reached at any time visitors will be asked to queue with a simple “one-in, one-out” system in operation.