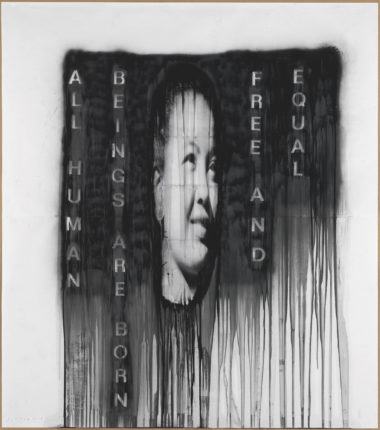 In collaboration with the Picasso Museum, Antibes, YSP presents two complementary installations of drawing by Jaume Plensa. They highlight the artist’s devotion to a process that traverses many media and navigates the relationship between language and silence, darkness and light.

Works in The Weston Gallery will reflect Plensa’s belief in the importance of encoding human rights in political systems and of unifying diverse cultures, ages, genders, faiths, and races. They include Face (2008), a series of mixed media works on paper featuring portraits of people from across the globe alongside excerpts from the Universal Declaration of Human Rights. Also featured is April is the Cruellest Month (2020-21), a group of 28 drawings made during lockdown, addressing universal psychological reactions such as panic and anxiety. Taking drawing into three-dimensions are Continents I & II (2000), etched onto layered glass slabs, and the suspended wire heads Invisibles (2016).

Plensa’s installation in YSP’s 18th century Chapel will amplify its qualities as a spiritual and meditative place. In the nave, two marble sculptures of girls’ heads with closed eyes will stand in silent communion, suggesting hope for a shared global humanity. On the walls, the dark forms of Anònims (2003), 16 drawings of shadowy, almost human-sized bodies with unknown faces, are ciphers for generations, a community of souls.

Plensa’s White Nomade (2021) is newly sited in the Chapel Garden, joining his cast iron sculpture Wilsis (2016) located on the lake shore and Wonderland (1993), on the west end of the Visitor Centre. An illustrated publication documenting this project as well as some of Plensa’s seminal works previously shown at YSP will be available shortly after opening. The partner exhibition of Plensa’s drawings at the Picasso Museum, Antibes runs June to September 2021. A major publication of Plensa drawings will accompany both exhibitions.

The exhibition is supported by Galerie Lelong Paris and New York.

On 29 September Jaume Plensa’s new permanent sculpture, WE, located in Shard Quarter, London Bridge was unveiled. WE celebrates the diversity of language, creating a new dialogue through art as a sculpture comprised of two parts, one in The Shard’s piazza and one suspended outside the building’s entrance, facing each other. The Shard’s owners, the State of Qatar and Sellar, commissioned the piece with curatorial support from Futurecity and a public art advisory committee.