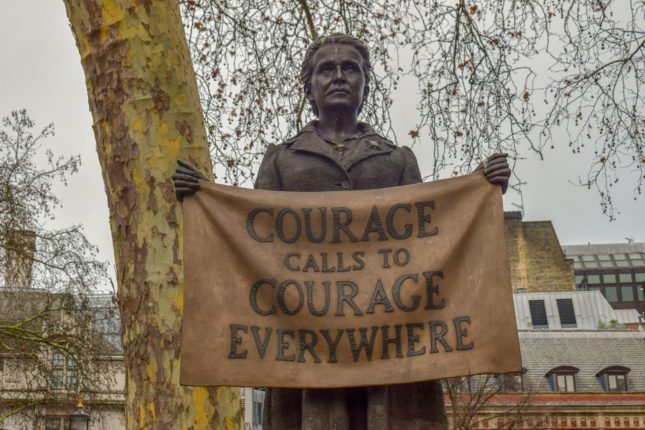 Mrs Fawcett's Handbag is a costumed performance of a suffragette's tale.

Fawcett joined the London Suffrage Committee, and in 1869 spoke at the first public pro-suffrage meeting held in London. In March 1870 she spoke in Brighton, her husband's constituency. As a speaker she was said to have a clear voice. In 1870 she published her short Political Economy for Beginners, which was "wildly successful", running through 10 editions in 41 years. In 1872 she and her husband published Essays and Lectures on Social and Political Subjects, containing eight essays by Millicent. In 1875 she co-founded Newnham Hall and served on its council.

Fawcett began her political career at the age of 22, at the first women's suffrage meeting. After the death of Lydia Becker, Fawcett became leader of the National Union of Women's Suffrage Societies (NUWSS), Britain's main suffragist organisation. Politically she took a moderate position, distancing herself from the militancy and direct actions of the Women's Social and Political Union (WSPU), which she believed harmed women's chances of winning the vote by souring public opinion and alienating Members of Parliament. Despite the publicity for the WSPU, the NUWSS with its slogan "Law-Abiding suffragists" retained more support. By 1905, Fawcett's NUWSS had 305 constituent societies and almost 50,000 members, compared with the WSPU's 2,000 members in 1913. Fawcett mainly fought for women's suffrage, and found home rule "a blow to the greatness and prosperity of England as well as disaster and... misery and pain and shame".