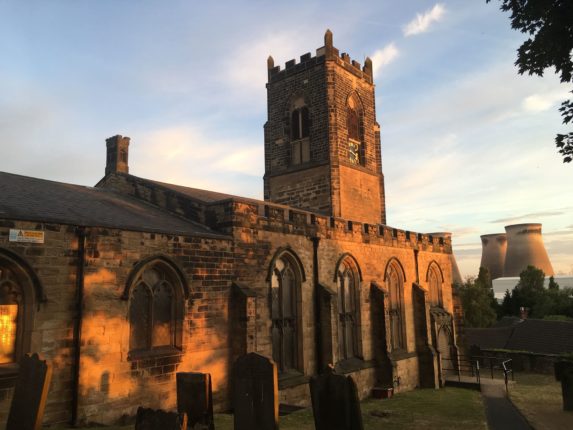 Visit this beautiful church and explore its history. Open House drop in.

St Edward the Confessor Church has a long history, there is some evidence of an early Saxon church, some parts of the tower are of Norman design and certainly there was a church and priest here in the 12th century. Thomas de Brotherton is our most famous son. He became the first Earl of Norfolk and is recorded as being born in the Manor House here and his father Edward 1st came from fighting the Scots to take part in his baptism in the church in 1300.

We have the lid of a crusaders stone coffin in the North Porch.

Cardinal Wolsey is reputed to have baptised and confirmed 500 souls on the Ferrybridge marshes as he journeyed to his castle at Cawood. During the Civil War Commonwealth forces camped in this area during the sieges of Pontefract Castle.

The local aristocratic family the Ramsdens were involved in the sieges too and in the church the Ramsden Chapel with its many memorial plaques bears witness to the influence and patronage of the church by the Ramsden family.

Of historical significance was the arrival of a French Huguenot Charles Daubuz to be vicar of the parish in 1699. He had left France when the Protestants there were in grave danger following the revocation of the Edict of Nantes. He was a noted scholar writing theological commentaries and of late he has attracted the interest an attention of the Huguenot Society. When he died three gold coins from Louis XIV were found in the wall of the vicarage.

The church building was enlarged and reopened in 1813.