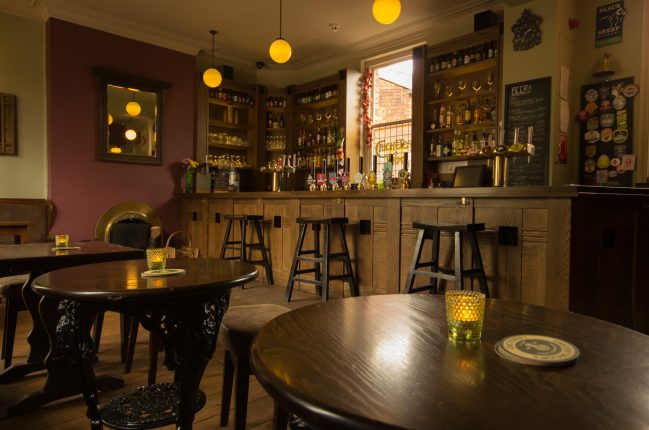 The Cricketers is a great local with great beer, a multi-award winning CAMRA beerhouse situated in the village of Horbury. Built in 1898, The Cricketers is a traditional red brick Victorian building with timber frame frontage to the third storey.

The pub was reopened by Beerhouses in November 2010 and renovated to a very high standard. The exterior was re-badged using an Arts and Crafts lettering which was used in the foundation stone. The pub’s connection with Melbourne Ales was emphasised by using the famous bowing courtier symbol in signage and in the ground floor windows.

It features a beautiful oak bar and the windows behind the bar have been exposed and restored with one featuring stained glass with arts and crafts lettering. Stained glass was also put in the windows of the internal doors using a pattern found elsewhere in the building which is thought to be original.

On the bar you will find 8 real casks ales with a permanent from Timothy Taylor’s plus 7 rotating guest beers from the best brewers in the country.

There are a wide range of other draught products including a permanent craft line dedicated to Magic Rock Brewing, 4 rotating craft beer lines, continental lagers and fruit beer. The Cricketers stocks a wide range of world and UK craft beers as well as an extensive range of gins, tequilas and other spirits.

On a winters day you will be greeted by a roaring fire. Well behaved dogs are more than welcome.